Dive Housing and Filters - for GoPro

GoPro cameras are used for an almost endless range of activities limited only by the imagination.

Water-based activities are extremely popular ways to use GoPro cameras. The earlier model cameras (HD HERO to HERO4) came with a waterproof housing to protect the camera when used in and around water. The HD HERO, Hero2 and HERO3 Housings were all waterproof down to 60 metres enabling them to be used for deep Scuba Diving.

The majority of recreational Scuba divers don't ever go down that far, so when the GoPro HERO3+ and HERO4 were released, the new Standard Housing was made smaller and light and was only depth rated to 40 metres.

The release of the HERO5 revolutionised the cameras. The camera was released without a housing at all. The camera itself was waterproof down to a maximum depth of 10 metres. This made the cameras suitable for just about all other waterbased activities, except Scuba Diving.

For Scuba diving with the later models (Hero5, HERO6, HERO7, HERO8, HERO9 and the HERO Sessions cameras) you will need to purchase a DIVE housing.

Note: Many people buy additional housings to further protect their GoPro cameras against bumps, scrapes and impacts for Above-water activities as well.

Due to the loss of the colour RED from the light spectrum the deeper underwater you go, you can add a filter to your Housing to help colour correct your footage.

This category includes Kits that include a Housing AND filters, rather than buying them separately. 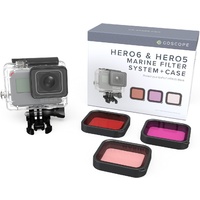