Early model GoPro cameras were designed to allow for the addition of a "BacPac". These were either battery Bacpacs or LCD Bacpacs.

Battery bacpacs gave additional battery power while the LCD Bacpacs allowed you to see what you were shooting via an LCD display.

There are very few bacpacs left available, as the later models now have a built-in Touchscreen on the back of the camera itself.

However, you can GoPro HERO8 and GoPro HERO9 cameras into a Media Mod that can take additional Lights, Microphones and Displays.

The GoPro Display Mod resides in this category. 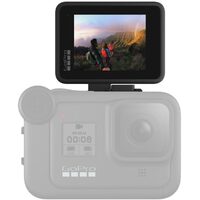